Mother Teresa’s Love For All

“By blood, I am Albanian,By citizenship, an Indian, By faith, I am a catholic nun, As to my calling, I belong to the world,As to my heart, I belong entirely to the heart of Jesus” -Mother Teresa

Mother Teresa chose to “serve the poorest of the poor and to live among them and like them.” She saw beauty in every human being. She, along with others of the Missionaries of Charity, strove to make the lives and deaths of those around them more peaceful and full of love.

Mother Teresa only half way. What really she said was this: “If you hold an anti-war rally, I shall not attend. But if you hold a PRO-PEACE rally, invite me.”

Mother Teresa did not condemn the rapists, but quietly took in the abandoned babies and nursed them. Nor did she condemn the people of Calcutta for the people dying in the streets, instead took them in and cared for them in her own — albeit rather crude — way. 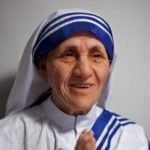